This site presents a model of the universe as the surface volume of an expanding, hollow, four dimensional sphere, termed the hyperverse. It leads to insights about the nature of time, and gives us a model for the creation of matter and gravity.

New paper added on 1 February 2016 showing that we can use the geometry of a 3-sphere, expanding at twice the speed of light, to calculate the radius of the observable universe, further supporting the contention that the universe is the surface volume of an expanding 3-sphere.

Paper added (4 December 2015) that shows how well the hyperverse model fits into the Friedmann equation. It shows that the universe is undergoing a constant expansion rate. The universe is not a Friedmann-Robertson-Walker universe.

A Short Summary of the Concepts

On this page, we will briefly review some of the concepts presented on this website. Links to pages with more details are provided.

In the book, “Three Roads to Quantum Gravity”, Lee Smolin suggested that space might be composed of discrete units, “atoms of space”. This concept morphed one night, in 2007, into the idea that if space existed as an entity, then gravity might be the absorption of space by matter.

Curved space is commonly visualized using a rubber sheet with a heavy ball placed on it, distorting the surface. The closer to the ball, the greater the degree of curvature of the surface. We can model the absorption of space by matter using a tub of water and pulling the plug. The closer to the drain hole, the faster the water moves towards the drain.

Absorption of space would produce an inverse-square relationship, exactly as seen with gravity. The model suggests that the curvature of space is really a measure of the velocity of space.

A Model of Matter Based on Atoms of Space.

See the introductory video.  From the idea that space exists, and it is being absorbed by matter,  we can create a drawing like this:

To help visualize it, imagine two power drills, each with a spinning sanding disk, and two people holding the drills. Bring the disks together, and there would be a crashing, repulsive, response. Reverse one of the drills, and the drills's sanding pads could actually bind together, turning in unison.  This is how electrical repulsion and attraction at the quantum level works. We get either attraction or repulsion, depending on the orientation of spin.

The Model Explains Fractional Charges and Anti-Matter, and Gives us All the Charge Variations Seen in Elementary Particles

Using a rule that we can have six points of connection per particle, we can create a model of the electrical structure of all elementary particles. Visualize a cube, which has six faces, each face with a spin orientation.

Notice in the table below, that this simple approach gives us all the fractional charges and anti-particles. The "Image" column is a two-dimensional representation of a three-dimensional arrangement. The 'nu' notation, as is the rest of this, is explained on the particle page and paper.

We can build proton and neutrons using the model. A proton is composed of two up quarks and one down quark, giving it a 12n6u configuration. The proton has a net one positive charge, but it still has those six negatively oriented quanta. We can conclude that the proton has a hidden, full negative one charge within it, giving us an explanation for why the electron does not fall into the nucleus; it is repelled by the hidden negative charge. See: particle paper, particle page.

The Dark Matter Particle is Probably a "Condensation Neutrino"

For brevity, see page and paper.

The Universe is the Surface Volume of an Expanding, Hollow, Four Dimensional Hyperverse

There is a simple solution to this problem. If the universe was the three-dimensional surface volume of an expanding, hollow, four-dimensional sphere, then every point in space would be in contact with the surface. Every point in space would be touching the nothingness into which space is presumably expanding. and thus every atom of space in the universe, everywhere, has equal, and total, access to the edge of space, and can expand radially, into the fourth dimension. It is similar to making a circle larger by increasing its circumference; more room is automatically created by the growth of the circle's circumference. See paper, page, video1 video2

The Hyperverse Radius is Expanding at 2c

We have several important considerations here.

1. We get an expansion rate that is exactly twice the speed of light! Is this a coincidence, or is it significant? Many people will just say it is interesting but has no significance and let it go. We claim that this is an astoundingly important result, and will develop this simple observation into a full-fledged cosmology that gives us a model of time, tells us the nature of the expansion of space, why quanta exist, what the Planck values really are, how big the whole universe is, and what matter and gravity are and why they exist.

2. A 2c radial expansion might make you say to yourself, "Hey, wait. Nothing can move faster than the speed of light." But relativity applies to motion within the universe; whereas this is motion of the entire universe, of every point in space into the fourth dimension. The 'platform' is moving at a constant velocity of 2c.

We generate a new equation for the Hubble constant, based on the hyperverse radius:

Radial Expansion is Connected to the Speed of Light

The Hyperverse Circumference is Expanding at the Hubble Constant

The Hubble constant is the rate of the circumferential expansion of the hyperverse. The surface of a hyperverse, whose surface volume matches the volume of the observable universe, is expanding at the Hubble constant. See these links: page, paper, and video

The Radius of the Observable Universe

We can use the hyperverse model, a time-scaled 3-sphere, expanding at 2c, to create a simple algebraic equation for the radius of the observable universe.

The Hubble constant is a measure of the rate of separation of galaxies, and its value is about 68 kilometers per second per megaparsec of separation. Mathematically, distance per time per distance gives us a dimensionless number per time, because the distances cancel out. We show in the Hubble paper that the Hubble constant can be expressed as the fractional increase in the energy of the universe:

The Foundation of Time

Quantum Time is the Time it Takes an Elementary Particle to Absorb a Quantum of Energy.

We show that the quantum time value of an elementary particle is the time it takes the particle to absorb an SEQ quantum of energy. Quantum time, quantum energy, and quantum gravity are all connected.

The unit of quantum time is not constant, but increases with expansion. The rate of increase of the ratio of the unit of atomic time to cosmic time matches the increase in the expansion rate of the whole hyperverse, cancelling it, giving us the 2c expansion rate we measure. See the paper.

We show in the quantum time paper that, due to the geometric mean expansion of space, the SEQ absorption time is related to the energy of an elementary particle via the time-energy uncertainty relationship. The quantum time - the time for the particle to absorb a quantum of energy -  for any elementary particle is easily calculated using the time-energy uncertainty relation.

The Geometric Mean Expansion of Space

Quanta Exist Because of the Geometric Mean Expansion of Space

The geometric mean expansion appears to produce two quantum levels, one based on the radius, and the other on the energy, of the observable universe. It appears that the very reason quanta exist is because of the geometric mean expansion of space. The energy quantum appears to be the quantum of our quantum mechanics, while the radius quantum is much smaller, and appears to represent the whole universe. Those 'atoms of space' turn out to be quanta.

The Large Number of the Universe

The geometric mean expansion model generates Dirac numbers, and gives us Scott Funkhouser's  'large number of the universe', a notable result in itself. The square of the ratio of the hyperverse radius to the initial radius gives us the large number:

The Planck Values Represent the Initial State of the Universe

The Universe Comes From Itself

And how can a universe come from (almost) nothing? The geometric mean expansion of space suggests that the universe comes from itself.

The Origin of Matter and Gravity

In the paper on the origin of matter and gravity, we find an explanation for the existence of particles of matter. Matter is condensed space.

The target values that the ideal particle represents are not actually the values the universe can obtain, due, presumably, to the spin or charge interactions of the resultant particles. Importantly, notice that the radius, mass, and number of particles are a function of the hyperverse radius, meaning they change with time: 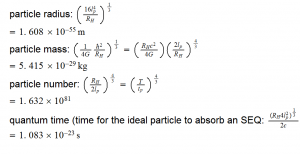 Particles of Matter Change over Time

The equations giving us the ideal particle show that elementary particles are not static entities; they change as the universe expands. Matter is dynamic.

Due to the continuing expansion of the universe and the associated continuing increase in its angular momentum, particles must continually accrete the quanta of space, and the particles are continually being crushed down even more. All the while, the universe continues to create additional particles of matter.

For example, an electron today is not the same as an electron yesterday, or tomorrow. Matter is dynamic, changing as the universe expands.

Gravity is the Ongoing Process of Particles Accreting the Quanta of Space to Conserve the Increasing Angular Momentum of the Expanding Universe.

Matter is dynamic, and particles must CONTINUALLY accrete the quanta of space. This ongoing accretion of space is gravity. See page, paper, videos. Matter is made of space. Matter continually absorbs space. The absorption process is gravity.

The Universe is not a Friedmann-Robertson-Walker Universe

The FRW model of the universe assumes all matter and energy was created at the time of the Big Bang. Fred Hoyle's Steady State theory is based on particle creation continually occurring for all time.  Hyperverse theory states that matter is continuously created, but starting at the Big Bang.

Placing the hyperverse values into the Friedmann equation shows a constant expansion rate, confirming the constant 2c expansion rate we get for the radial expansion. See the paper.

So that is a very brief summary of the work to date, ready for sharing. The website has the details, and gives many more interesting results that this hyperverse model produces. I welcome you to explore the site. Feel free to share your thoughts.