The Basis of Electrical Attraction and Repulsion

If space is composed of 'atoms of space', and these atoms of space have spin, we can combine them to create units of matter that have electrical charges that match what we see with elementary particles. This simple system explains fractional charges and antimatter.

Figure 1: Attraction. When opposite poles face each other, they can unite in their spin. This is attraction.

Figure 2: Repulsion. When the same poles face each other, spin is opposed, and the units would be repelled from one another. This is repulsion.

If we allow each particle to have six sides, or points of attachment, we get: 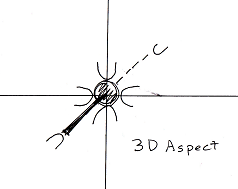 From this, to make drawing easier, we can place all six atoms of space in a 2D representation, as such:

A 2D representation of the 3D arrangement.

We can create a notation for these arrangements to allow us to use a text-based description of the arrangements. 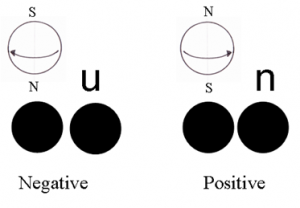 We find that if six atoms of space are assembled to form a particle, we can create all the elementary particle charge relationships. A full charge, of negative one, occurs when all six of the bound quanta, or atoms of space, are oriented so that their negative poles face outwards. If five face outwards, and one inwards, then we have a net of four of six facing outwards. This would give us a net charge of minus two-thirds, corresponding to an anti-up quark. The following table gives the arrangements, charges, and associated particles.

With the  'nu' notation, we have underlined the pairs of spin that cancel each other, allowing for a more rapid assessment of the net charge of the particles. 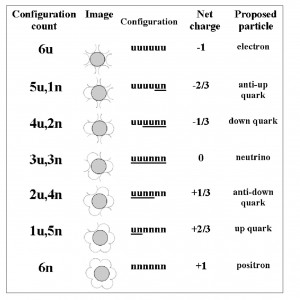 Table 1. A list of all the combinations of six orientations of the quanta of space surrounding the center. This produces all the known electrical charge arrangements of elementary particles. Click on the table to see it more clearly.

This system gives us all the known electrical charges, explains fractional charges, and produces the anti-particles.

We can use the model to explain particle-antiparticle annihilation. IN this example, we place an electron near a positron, and we find that all six quanta of either particle are able to bind to, and attract each quanta of the other. There is nothing to stop them from pulling together fully. 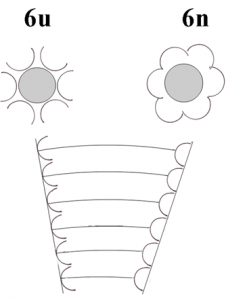 When a particle meets its antiparticle, all the quanta are able to unite and pull together. There is nothing to stop the particles from being pulled together.

We would find that combining all pairs of particles and their anti-particle will result in annihilation due to unrestrained attraction.

We can use our particle model to construct protons and neutrons. Let us start with the neutron.

By combining two down quarks and one up quark, we get the neutron. All the component quanta, within the system of three, are cancelled. Notice that no two quarks can fully attract, or repel another. The system of three quarks gives a neutral charge. The 'nu' notation is 9n9u; all components cancel.

We can construct the proton using three quarks:

The 'nu' notation of the proton is 12n6u. It leaves a net of six unmatched positive quanta, for a net charge of plus one, just right to bind to an electron.

The proton has a hidden full negative charge, and this is why the electron is not fully pulled into the proton.

The above materials are in this paper.

The Point of Attraction

In the above description of elementary particle structure, we speak of a "point of attraction".  In pursuing the concepts presented on this website, the 'ideal particle' was discovered, explained in this paper, and on this page. The ideal particle appears  to represent the target the expanding universe is aiming for in particle creation. Actual particles presumably vary from the ideal due to the effects of the various spin orientations into which they can assemble.

The ideal particle concept gives us a working tool to calculate the effects of expansion and time on particle mass, radius and number. What we see is that particles are not static entities, but their mass and radius change with expansion, and the number of particles also increases as the universe grows.

The "point of attraction" is simply the center of the particle.

Overall, this model gives a simple basis for the electrical structure of elementary particles, explaining fractional charge and anti-particles.